Well it seems like several of my posts have come together to identify the linking thread between them all. That being global corruption and greed. As commented yesterday the excellent anti oppression group #Anonymous have successfully organised global marches against the misuse of power. Power to the silent masses they say. 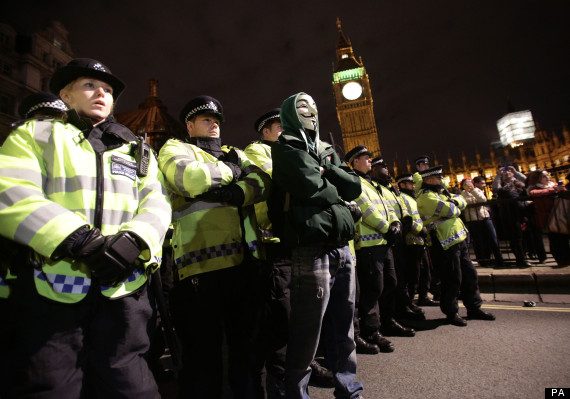 This idea, this revolution was pushed forward nicely by Russell Brand in his initial interview with Jeremy Paxman that has now received over 2 million hits. He has certainly pushed the topic into the global area. In the initial interview he spoke about how we must #VetoTheVote, not playing the game and in the clip below he talks about complete disobedience. A peaceful revolution is needed. This is not about endangering anyone (even those corrupt fat cats who would endanger us) this is about love, love and acceptance of the unified nature of nature itself. That being we are all one consciousness experiencing itself as separate as a kind of “optical delusion of consciousness” as Einstein said.


He was seen at the masked protest in London on Bonfire night the 5th of November. The MillionMaskedMarch certain put forward the point that global corruption must end. Many protesters were wearing the Guy Fawkes masks as a sign of the unified idea of disobedience to the establishment.

We must keep talking about who is in charge and who is controlling what. We are against corruption in politics and finance. Billionaires corrupt politicians, pay their bills and enslave the people. It’s the government that is controlled by the money that backs them. The protest occurred everywhere from South Africa to Australia to America and the UK. Millions have turned out for what is a continuation of the Occupy Wallstreet movement tackling big bank corruption. Check the video below.


On a day when we hear Yasser Arafat was actually poisoned with Polonium (manufactured inside a nuclear reactor) we question who is in charge and what sort of morals (if any) do they have? Chances are they are so brain washed into maintaining and holding onto their learned behaviour patterns they lack the flexibility needed to evolve.

Perhaps if we had forced yoga inside the Houses of Parliament everyday it would address some of the issues. Everyday people battle with holding onto what they know, and if what they know is corruption then we need to re-educate them, with love.

The time is now for conscious media production. Search the web, join the conscious exploration #MillionMaskMarch is the continued demonstration that we, the people, the educated masses, will not be silenced.

The internet has not occurred right now just co-incidentally. There is a purpose. Today on the planet sees more enlightened people then ever before. We are consciousness and we are evolution.