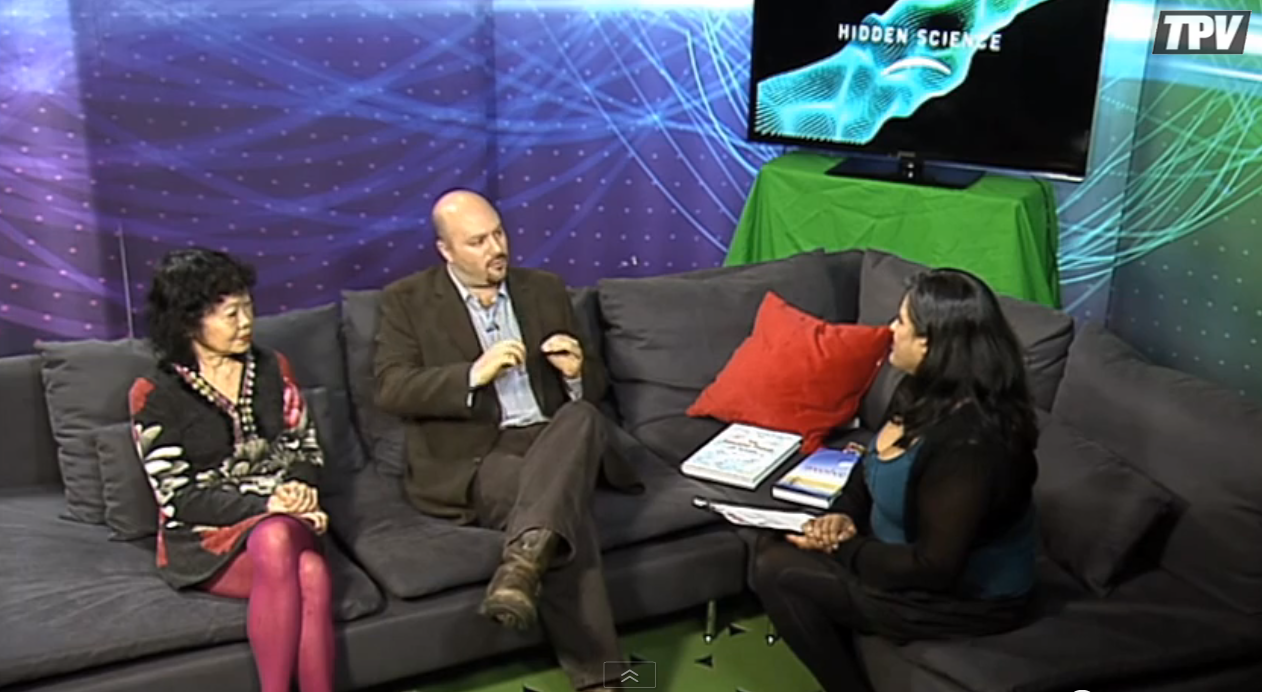 I was recently interviewed on a great TV channel called The People’s Voice –
the show was the Hidden Science, hosted by the wonderful Manjir Samantha-Laughton with Dr Mae-Wan Ho and Dr Gerald Pollack. Both of my fellow guest are leaders in the field of quantum communication and water. Read below and see the Water Conference I hosted at the end of last year.

The importance of water cannot be underestimated. Recently I hosted the Energy Medicine Exchange no 10 conference dedicated to exploring water, you can find the entire conference recorded here. Speakers included in the conference were: Gerald Pollack, Alexander Hankey, Manjir Samantha-Laughton & Shui-Lin Lo.

Everyone knows that we are ‘bags of mostly water’ (as one alien said to a star trek crew member ones). 70-75% in the body and more like 80% in the brain. However most people don’t know why water is so vital to life and this is something we are actually only just finding out. Water is the reason that aspects of the body can communicate. It is only when collagen is hydrated (surrounded by a coherent structure of water) that it is semi-conductive (allows for the movement of electrons). This is vital for the communication of life but also for cell repair and the reduction of inflammation. One of my teachers, James Oschman in his excellent two books ‘Energy Medicine – The Scientific Basis’ and ‘Energy Medicine in Therapeutics and Human Performance’ outlines this process perfectly. You see the most dangerous thing to health and wellbeing are free radicals. These are the things we digest in burnt or fried foods and also what we produce when stressed. Mae-wan Ho also published a fantastic book worth checking out to understand the dynamics of quantum coherence in the water and within living systems. Her book ‘The Rainbow and the Worm’ is a dinvine dance between intuitive jazz and quantum science.

Inflammation is one of the major causes of most disease and if we can find a way to mop it up (with anti-oxidants) then we will enable and support the healing process of the body. However sometime anti-oxidants can’t get to the site of the inflammation because the area is locked off, secured by the body so none of the inflammation causing irritants leak into the blood stream. This system that protects us also can hinder repair missions. It would be like saying a building that is on fire is too dangerous to venture into for the fire fighters. As such all they can do is stand and watch, much like the copious amount of anti-oxidants you might take to have good health.

What’s the solution? ELECTRONS – You see free radicals are starving of electrons and that is why they are so damaging, because they are so eager to get an electron (or two) that they steal them off otherwise functioning molecules. When this happens it destroys the function of those otherwise happy little molecules. We thus take anti-oxidants (that have extra electrons) to offer themselves up to the demon free radicals 🙂 They aren’t actually that bad, I mean Oxygen is actually a free radical and we need that to live. Free radicals do their job, they mop up and destroy invading substances to the body, sometimes they just go over board. Like big hefty bouncers at the night club door -generally you’re happy you have them there, but if they get drunk you might wish they weren’t!

So back to water! Water makes the most biological material (DNA, RNA, Myosin, Actin and Collagen) able to conduct electrons. Without water these proteins that usually conduct (actually semi-conduct) are insulators and will not field electrons anywhere. If you take electrons directly into the body (say from the Earth) they are small enough to cross through the ‘police line’ of the inflammation zone. In other words, they go straight to the site of where the free radicals are causing a mess and disable them by donating themselves!

Now water has also, more recently, been found to self order at hydrophilic (water loving) surfaces. That’s most of the body again! It’s been found that water at a hydrophilic surface creates an exclusion zone, an area high in free electrons and exclusive of extra hydrogen ions and other materials in the water. This happens at about 100 molecular layers – it was previous thought maybe 1 or 2 layers would self order. Now we understand this Exclusion Zone creates a crystalline matrix that forms ice like crystals except in a fluid, plasma form. This can potentially create a buffer zone between the electrons moving through the biological substance, like collagen (the living matrix) and the hydrogen rich area of the ordered water just outside the exclusion zone.